adaptation. In order to cover the vast tracts of barren and degraded lands with relative ease, rather than tree plantation, seed balls are planted or scattered in the vast tracts of land and left to nature to do its regeneration works. This activity is most preferred before arrival of monsoons. Benefit of seed balls scattering  over scattering the bare seeds  is that the chances of seeds being consumed by rodents or birds or other insects is avoided, also seed balls wont roll away easily or be blown away by winds or flown away by water easily and thirdly they will only germinate when rain has fallen and conditions are favourable for seeds to germinate. Thus if we look at resource efficiency and outcome it makes perfect sense to work on seed balls as chances of germination and making the barren land green are much higher with lesser effort.

To commemorate the Environment day – 5th June, seed balls making event was organised on 4th, 11th June 2017 at Saurastra Samarpan Ashram, near Wankaner ( 50 Km from Rajkot city) which falls under semi-arid region. It’s a unique event conducted for the first time in Gujarat state and emerged out of brainstorming on how to involve citizen participation drive for upping the environment conscience, greening and address climate change concerns by Ecology club of Rajkot – founder (Ms Chinmai Hemani) and one of the leading volunteer (Ms Atal Sharma) of Ashram while taking the benefit of monsoons and thus the emergence to conduct this activity. Since ashram had the land and the required resources as well as the idea to green the campus what better place than the ashram premise to conduct this event.

What is a seed ball?

Seed ball is an ancient Japanese technique called Tuschi Dango meaning ‘Earth Dumpling’ where by seeds are encased in mixture of clay and soil humus. It was reintroduced by Japanese microbiologist Masanbu Fukuoka in 1938.  It’s a technique of introducing vegetation to damaged lands simply by scattering seed balls directly onto ground, and not planted.

In the next five years time, if nature is kind and monsoons are good while volunteers also take care of the campus it will transform this barren land as seen now to a lush green campus. More over there would be arrival of wildlife, birds, butterflies etc. As the soil gets richer with humus and micro organisms, its water retention would also increase and thus a start of return to better environment and micro-climate.  So this will work not only as a greening initiative but a climate change adaptation strategy as well.

The event was quite a success (in terms of fetching the volunteers and making of seed balls – the overall success would be measured as to how many planted seed balls eventually converted to mature trees which would take time to measure) and it would be good to probe over as to:  how to make event of this scale? What sort of communication tools is useful? How does management play a role? What sort of information is needed before hand to plan such an event?

Some of the learning’s from this event:

Ways can be thought as to how religious heads can be involved into addressing daunting local environment, social and climate concerns today.

Ways can be thought as to how can government social forestry or forest department join hands with institutions and people to make it a public private partnership in true sense.

Care can be taken here to make arrangements to make it a low carbon and environment friendly event where food waste is taken care of, reducing usage of disposables like plastic or paper cups etc, saying no to processed food packets which would leave the thrash behind which cannot be recycled.

Care must be taken to procure seeds of local varieties which are indigenous and appear in that region. Exotic varieties should not be opted.

The seeds drying can be tagged properly and once dried same plants seed balls should be stored together.

On scattering or planting the seed balls a mix of variety of plants seeds balls should be made so that all the different varieties of plants are interspersed.

Though the original seed ball mix consists of only 5 parts soil and 3 part compost with appropriate water to make thick slurry which can be rolled into balls without making it ill shaped once rolled, it was sought to improvise the procedure by adding fresh cow dung, cow urine and havan / wood ash for better results as indicated by Deepak Suchde of Malpani trust and propagates Natueco farming technique.

Once the ball is rolled a seed of chosen plant would be slid in the center of the seed ball. The seed balls are then allowed to dry for a couple of days. Once dry they can be stored in moisture free place and scattered during monsoons in the designated land.

Soil and havan ash are sifted to remove stones and pebbles to get a finer mixture. Knead into a nice mixture and make seed balls as mentioned above.

Why use cow dung, urine and havan ash?

It is believed that the addition of cow dung , urine and havan / wood ash would make the soil more nutrient and anti microbial and provide right nutrition to the seeds its holding when the seed balls dissolve in monsoon rains.

Havan ash is made from burning Havan materials which may consist of dried cow dung cakes, various grains, ghee, wood etc.  Such ash contains various macro and micro nutrients like potash, phosphate, calcium and trace amounts of micro-nutrients such as iron, manganese, boron, copper and zinc. The largest component of ash is calcium carbonate, a common liming material that increases soil alkalinity. Calcium is the most abundant element in Wood Ash and gives it properties that are similar to agricultural lime. More over it has anti-bacterial properties which protects the seeds from pest attack. (Risse, 2002)

This monsoon .. try some hand at making and scattering of the seed balls.

Some of the photos of the event:

Making and drying of seed balls: 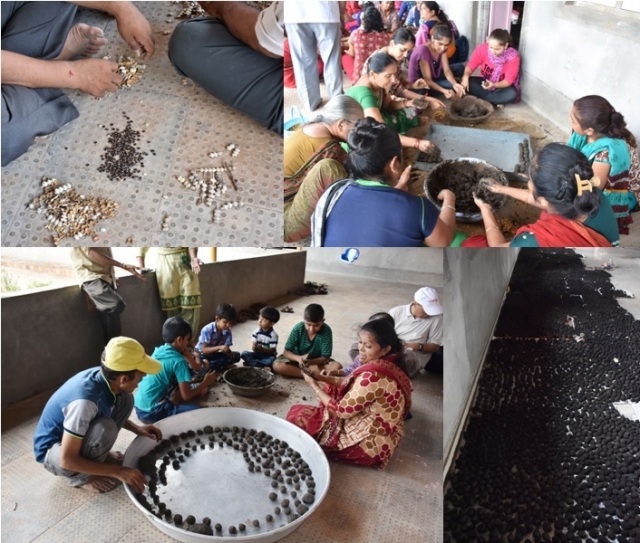 Planting of the seed balls in the vast tract of ashram fallow land: